Posted on October 3, 2011 by submoarancher

Please note that the following was not written by FreedomholdVP, but another member of the MAG. I would like to thank him and his father for their work! 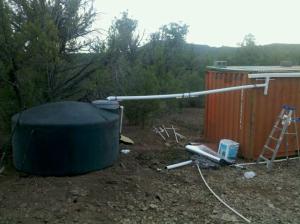 Before I begin to detail my experience building our rainwater harvesting system I would like to point out that I have no construction experience at all. This is the first time I have done anything that I would even consider construction. This was a learning experience for me; hopefully it will be for others too. I would like to say thank you to my dad, I almost attempted to do this alone but it would’ve been nearly impossible without his help.

The Plan: The plan was to build a rain water harvesting system by attaching corrugated plastic sheets to plywood (for a clean smooth contaminate free surface area) and angle it at one end with a 2×4 to give it a slight angle to the gutter. Also, during this process we will insulate the roof with rolls of insulation. The rain gutter will connect to a 3” PVC pipe system which will lead to an 1100 gal water tank. With a surface area of 160 sq. ft. (5 sheets of plywood.) for every inch of rain we collect (.62 gal) we will harvest 99.2 gallons of water. The plan is to filter the rain water through our Big Berkey water filter that will be part of an outdoor kitchen.

The execution: Theoretically this should’ve only taken a few hours to a day but that’s why it’s a theory right? We rented a fully enclosed U-Haul trailer (This was initially used to move personal items to the property but was kept to haul materials.) One advantage of the fully enclosed trailer is OPSEC; In remote areas, the people that are there will remember you and what you’re doing. A truck pulling a U-Haul trailer is someone moving furniture. A truck with (insert whatever project materials you have) is doing exactly that, building whatever. But why the need for OPSEC with a rainwater harvesting system? For me, I simply don’t want anyone to know what resources are in place at our property. Also, some jurisdictions require permits for rainwater harvesting or ban it out right.

Now for a trip to the local hardware store, ever notice how hot dogs come in packs of eight but buns are in packs of 12? Don’t worry, that theory is the same for other things too. Nothing is standard. Plywood is 8ft long but gutters are 10ft long and the screens the go in those 10 foot gutters come in 3f foot increments so at best you get 9ft per gutter so you have to buy and extra one and cut it. There were other little things like that but don’t worry you’ll find out for yourself. The important thing is to plan and visualize every step of the process so you don’t forget to buy anything you may need.

We have a 20ft shipping container so that means two 10 foot sections of gutter. Instead of using a joiner we used a down spout that would connect the two and serve as our joiner. (The disadvantage to this was that we would have a longer pipe going to the water tank which caused the piping to sag a bit, possibly disrupting the flow of water during a light rain due to the shallow angle. In the future I plan to re-do the gutter system to feed from the end closest to the tank. Note the brace in the piping in the picture below.) From there we purchased an adapter that will convert the rectangular shape of gutter piping to 3” round PVC. So, everything after the downspout is now 3” round PVC. Next we need to have a “first flush” system. This will allow the dirt, pollen, and leaves etc. to flush out of the system before going into your water supply. To do this we will have a “T-fitting” in the pipe line with a 10” piece of pipe going straight down to the ground. The bottom of the pipe is capped but a small hole is drilled to allow the water to drain (I used the smallest drill bit possible.) In the pipe is a tennis ball. As water flows in it fills the pipe with the initial dirty water. The tennis ball will eventually float to the top and act as a valve that closes off the small pipe forcing water to flow to the tank. You may want a larger first flush system 3-5ft of pipe. The only thing that seems to collect on our roof is dust and pollen so we only need a small flush. Also, since the rain that I was experiencing while at the ranch were short and light in duration I didn’t want to lose all the rainwater to the first flush system. Once through the flushing system it goes to the tank. A lesson learned here was that the first flush system combined with the long tube to the tank creates a lot of weight where the pipe meets the down spout. Instead of using silicone to seal and “glue” the pieces use PVC cement, the silicone will just stretch and break. (Note the small piece of pipe behind the down spout, this was to keep the spout angled straight down and not back at the container.) 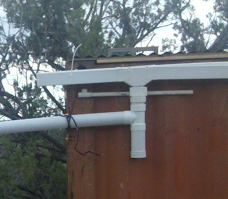 Our trailer was only 4’X8’ so we were limited on how many materials we could bring out at once. The first trip we took out the plywood, screws and small items, and corrugated plastic. Due to the terrain and the distance to the nearest city this first trip took 3 hours. The second trip took about the same amount of time plus the time it took to pick out and purchase supplies, stop for lunch and get gas… We finally made it out to the property to begin work around 3pm. 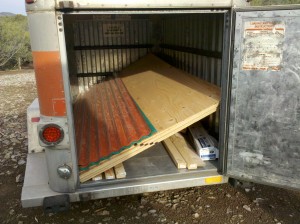 The weather caused serious delays. When I first got to work on top of the container, rolling out the insulation it started to rain and there was a lot of lightning overhead. Since it was already late in the day I decided to pack up for the night. There were several other times where the rain and lightning interfered with and delayed work. I did not have the luxury of planning this trip specifically to complete the rain water harvesting system. It was more of an opportunity. If I had I would’ve checked the weather and made sure I wasn’t trying to do work during thunder storms. I guess it was Murphy’s Law because the weather was perfect until I got there and clear as soon as I left. 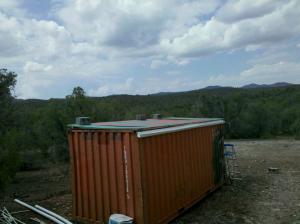 Another “complication” (that ended up being a blessing in disguise) was that I had planned on picking up the water tank from a “local” (about 2.5 hours away) water/septic tank store on a Saturday. I’m glad I checked their hours on the internet because they are only open M-F. I only wished I had checked earlier than Friday night. It worked out though because I still needed to put together the roof, finish laying the insulation, get the rain gutters and piping etc. I was also still unable to locate a utility trailer for rent. Both of the local U-Haul stores did not have them and there was one at United Rentals but it was too big for my small truck and it would also be hard to get to the property due to its length. Luckily I ran in to a “local” and explained my situation and he was able to point me to an Ace Hardware store that kept the water tanks in stock. It was Sunday afternoon and I didn’t make it down in time before they closed but I could see plenty of water storage tanks in their yard. I was there first thing Monday morning. I have to say, the folks at ACE were great, their customer service is excellent! I ended up getting a 1100 gal tank for $530 and delivered to the property for $50. This was a considerable savings because had I made it to the “local” tank store I was going to pay $421 for a 500 gal tank, plus I had to rent a trailer, a tank of gas and 6 hours of my day. Not only that but they completely re-arranged their delivery schedule to deliver my tank first thing that morning after I explained to them that I had to leave town the next day. What service!

It was also fortunate for me that it is common place for people in our area to live off of water stored in tanks. This meant that the employee’s at ACE were very familiar with my needs and were able to fit me with all the appropriate accessories. If you look closely at the pictures you will see a screen covering the opening of the tank. This is to keep mosquitoes and rodents out. Also, note the overflow pipe coming down out of the top of the tank. This too had to be covered with screen to keep bugs and rodents out. At the bottom of the tank there is a 3” ball valve that is reduced to the size of a garden hose fitting. Be sure to use a brass fitting at your connection to reduce wear and tear. The tanks come pre-fitted with these threaded holes so no drilling was required! 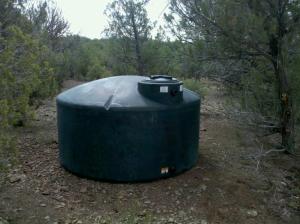 The weekend was spent screwing the corrugated plastic to the plywood and adding the 1×4’s to one end (for attaching the gutter to the “roof”) and the 2×4’s at the other end (to give the “roof a slight angle). Changing from a drill bit to a Phillips head screwdriver bit after drilling the pilot holes, so I could screw down the corrugated plastic was very time consuming. The work would’ve gone much faster if I had two drills. Once the pieces were all put together and lifted to the top of the shipping container I poured some water on the plastic panels to check the rate of flow. The water pooled in the middle of the plastic panel. I hadn’t foreseen the fact that, due to the length, the panels would sag in the middle. This meant I either had to re-build the panels and add 1×4’s lengthwise somehow to make them rigid or increase the angle at which they sat, I opted for the latter. We were limited on how much lumber we had so instead of running 2×4’s the length of the entire shipping container we had to cut small pieces and fit them where the plywood pieces met each other, and of course another trip to the hardware store for brackets and self tapping screws. 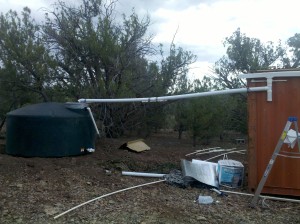 An important step to installing the tank itself is to make sure there are no rocks under the tank. 1100 gal tank means it weighs 8,800 pounds. If all that weight is sitting on a rock there’s no doubt it will punch a hole in your tank. I had to clear and level a much larger area at the last minute for the larger tank and I’m not entirely confident that its completely free and clear of rocks and that its level to my satisfaction but by now I was on my last day to work so I did the best I could. In the future I plan to go back, drain the tank and pour sand under it so it will self level as it fills. 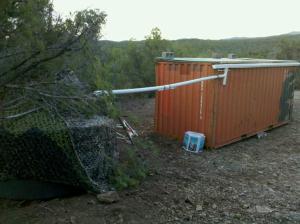 Who else uses rainwater as a method to collect water?